While at Dustin Anderson’s site last week reviewing his sort barn conversion, one thing quickly drew my attention.  When the barn was constructed, the builder installed plastic slat mats which are considered “best practice” in our industry.  Look at the result 6 years later. 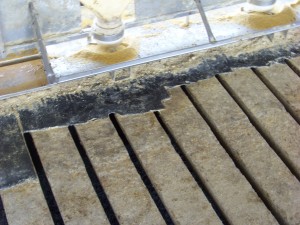 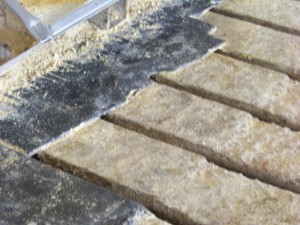 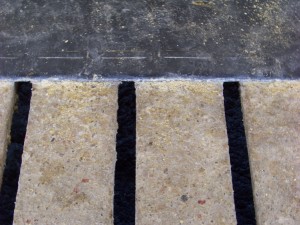 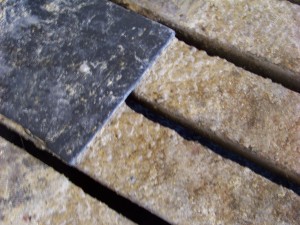 All the plastic slat mat did was move the problem out 12 inches!   Now, this is not terrible slat wear for six years of usage, but it will get worst.  A bigger mat could be placed under the feeder, but this would just move the problem out a little more.  The best solution to this problem isn’t a mat at all.  The ultimate slat saver comes in a bucket!  Hog Slat offers a product called Armor-Rock.  Armor-Rock is a two part epoxy with blended aggregates that form a wear and chemical resistant coating to protects the slat’s surface.   The liquid epoxy mixture is applied to the slat’s surface and then sand is broadcast on top to create a non-slip surface. 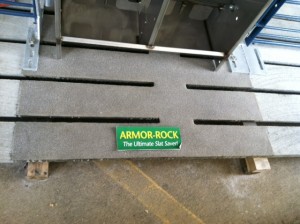 A huge advantage to using the Armor-Rock is it doesn’t cover the slat openings around the feeders.  Urine, water and feed wastes fall through because the normal slat opening remains intact.  Corrosive wastes are not collecting and just getting moved farther out on the slats, which is the problem with conventional slat mats. 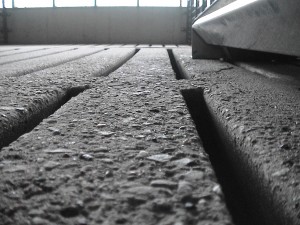 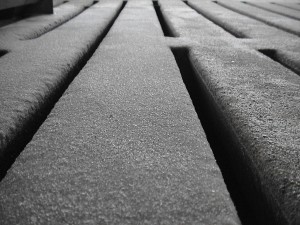 There is one slight disadvantage to using Armor-Rock over standard plastic slat mats.  It’s not the cost of the material; if Armor-Rock is purchased in bulk the price is virtually the same.  The key issue is the time it takes to install it under a feeder. When mats are used they are placed under the feeders, the gating is installed, and the installation is complete. With Armor-Rock, the feeders and gating are completely installed and then the feeders must be removed.  The epoxy is mixed, placed on the flooring and allowed to dry.  After the Armor-Rock cures, the feeders are replaced in the gating.   Because of the extra labor the Armor-Rock option is not offered by most contractors.

The choice is yours to make.  Chose the Ultimate Slat Saver with Armor-Rock and do it once or chose standard slat mats and fix it later.  You can pick up Armor-Rock at any Hog Slat store or purchase it on line at http://hogslat.com/armor-rock-kit