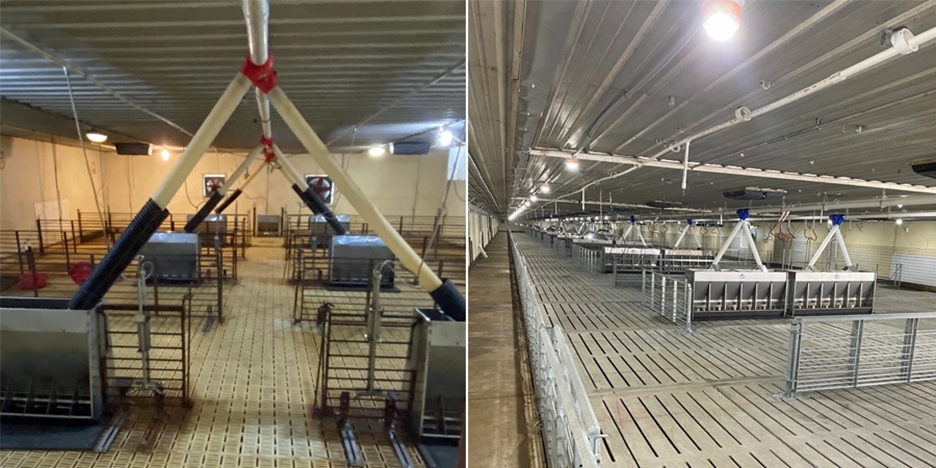 When presented with the opportunity to convert an existing 20-year-old nursery to a finishing facility, the owners of Probst Porkers LTD decided to move forward. Located near Sigel, IL, the partners worked with Hog Slat sales rep Ross Thompson to finalize the plans and construction timeline.

The existing building was 310' x 47' divided into ten rooms with a deep pit underneath. The process began by removing the interior walls and nursery equipment, including plastic flooring and beams. After verifying the soundness and correcting some of the columns and lintels, the next step involved installing new 4'x 10' concrete slats.

During hot weather, the ventilation switches to tunnel ventilation. Fifty-five feet of curtain-covered opening, located on the end wall and one of the side walls open to supply incoming air. On the opposite end of the building, seven 54-inch AirStorm belt drive fans pull the length of the building.

The new pen configuration lays out a side aisle along one exterior wall with ten 30-foot wide by 42-foot pens. Additional gates swing into place to create a ten-foot-wide fast sort alley in front of the feeders allowing pre-sorting before loadout. Each pen contains two 84-inch wet/dry feeders supplied from two 18.5 feed bins. Three AquaChief cups mounted on the center penning furnish water for each group.