Close
Menu
Show your wishlist 0
You have no items in your shopping cart.
Menu
Search
Wishlist
0
Filters
Personal menu
Effect of an additional waterer on growth performance of nursery pigs

Effect of an additional waterer on growth performance of nursery pigs

The key objective of this study was to determine the effect of additional access to water on nursery pig performance over a 28-day period. A total of 2,017 weanling nursery pigs were allotted to one of two treatment groups: Control (SC): Dual Standard Cup Waterers; or Test (WC): Additional, 4 Nipple Horizontal Water Bar. Pigs were fed according to the standard, three phase feeding program in place in this commercial unit, and were offered ad libitum access to water and feed throughout the trial. Providing additional access to water with the water bar incrementally increased water disappearance by 0.03 gal/pig. In addition, a positive response in average daily feed delivered (ADFD) was observed in Periods 1 and 3 (14.8% and 9.2% higher, respectively, P<0.05); and 5.2% overall (P<.10) for WB versus SC pigs.   Moreover, ADG was 8.8% greater for WB versus SC pigs in Period 3. Overall, this study provides evidence that the provision of an extra water bar in the nursery phase can translate into 1.4 lbs more feed delivered per pig resulting in 1.1 lbs more gain per pig in 28 days.

OBJECTIVE
Given the well-documented correlation of feed and water intake, the objective of this trial was to determine if the provision of additional access to water would promote higher water consumption, and concomitant growth performance in weanling nursery pigs reared in a commercial environment over a 28-d period.

METHODS
Pigs (n=2017) were mixed-sex housed in a single room within in a 4-room, commercial wean-to-finish barn, with a shared feeder between adjacent pens. Pigs were equally allotted to 42 pens to yield a stocking density of 48 pigs/pen (144 sq. ft./pen) Pens were allotted to one of two treatment groups as follows: Control (SC): Standard Cup waterers with 2 per pen located on the right and left sides of each pen, or; Treatment (WB): Control + an additional horizontal, 4-nipple Water Bar .

Pigs were fed according to the standard, three phase nursery program routinely utilized in this commercial facility, and had ad-libitum access to feed and water throughout the 28-day trial. Water disappearance for the SC and WB groups was monitored via individual mainline water meters supplying water to the standard right and left-side waterers, and the additional water bar.

Pen weights were monitored at the initiation of the study (Day 0) and thereafter at 7, 14 and 28 days. Feed intake was monitored by total feed delivered to each shared pen. All mortalities and removals over the course of the trial were also recorded.

Table 2 provides a summary of performance. A positive response in average daily feed delivered (ADFD) was noted in Periods 1 and 3 (14.8%, 9.2% higher, respectively, P<0.05); and 5.2% overall (P<.10) for WB pigs. This increase in ADFD translated into 8.8% higher ADG for WB pigs in Period 3, however no other improvements in ADG or G/ADFD were noted within the three periods or overall. 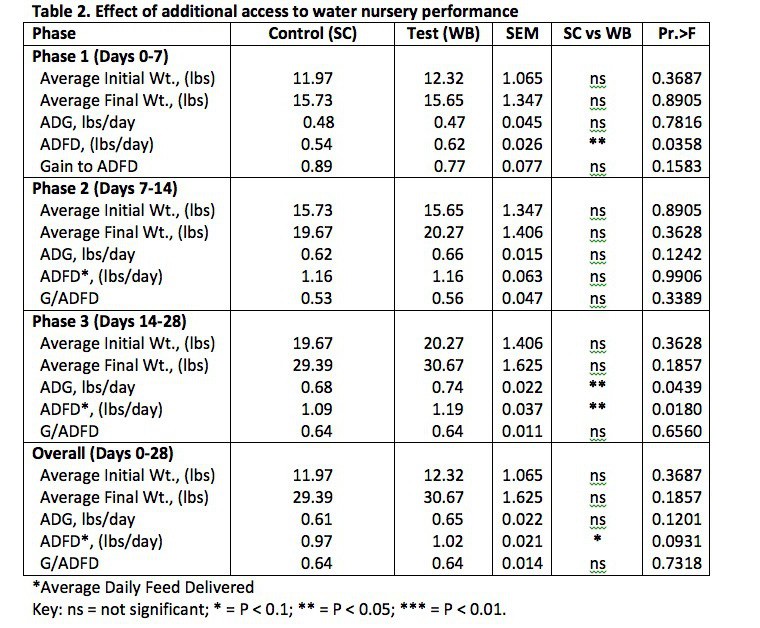 Conclusion & Recommendations
This study provides initial evidence that the overlay of a 4-nipple water bar to the standard dual cup waterer system to provide additional access to water, and promote increased water consumption has measurable impact on improved feed intake (as measured by total feed delivered).

Given the potential performance impact of improved feed intake together with the preliminary results of this trial, it is recommended that the study be repeated with the following modifications in order to more accurately assess the effect of increased access to water: