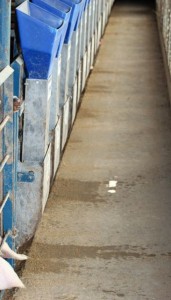 couple of weeks ago I received a call from Fritz Richards, Hog Slat’s national sales manager. Next time you are in North Carolina we need to run out to TDM #29 and take a look at the way they are utilizing a SowMAX feeder for feeding weaned sows.” It just so happened I was going to be in North Carolina the following week so I met Fritz at his office and we set out for the farm.  As we drove he filled me in.   “They have adapted 30 of the breeding row stalls with small bowl feeders and SowMAX dispensers mounted in the front gate.    It’s giving them a chance to compare the results against the other 70 stalls that are fed by the standard method.”   “What is the thinking behind that?" I asked.   “They know that if they can increase the energy intake of a sow from weaning to first service they will get production benefits.  The problem has been it’s tough to increase consumption without over feeding and wasting feed.  With the high cost of feed it’s more important than ever to feed sows correctly without wastage.”   “We have had several industry production advisors through the farm recently and they were very positive about what they saw.”   We showered into the farm and happened to catch the unit manager, Britt Hooper and his staff during their morning break.  Fritz spoke with Britt about his early experiences with the SowMAX test.  To view a video of his observations please go to http://hogslat.com/sowmax-feed-dispenser