In 2005 Dustin Anderson and Paul Anderson came to an agreement on a  venture allowing Dustin to quit his job at the local coop and farm full time. Besides farming 1,500 acres, Paul also serves as a member of the Minnesota House of Representatives and wanted to devote more time to his political career.   Part of the agreement included each of them constructing a 2,498 head finishing house with Dustin managing the sites. 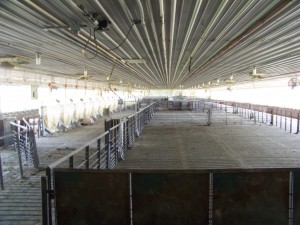 Dustin explained “The integrator that we fed with at the time spec’ed a sort barn system and we constructed the facilities according to the standard plan. The sort barn was different from what we were used to managing.  The pigs had to be trained to go through the sorting scale for about three weeks, we had to force them through until they learned where the feed was. Even with that type of training there always seemed to be a handful of pigs that refused to go through the sorting scale. They would literally starve themselves to death.  In addition, anytime the pigs became sick, the whole barn would refuse to go into the food court.  We would then have to open up the gates and give them access to the feeders. After a couple of days of that, we would have to retrain them all again!”

“Our death loss was a little higher than we would have like because it was hard to treat individual pigs. The pigs had a half a barn to run around in and giving a shot or separating a pig from the group was a job. The one thing I will say is that the pigs loaded for market like a dream. I could literally load a semi in 15 minutes. The pigs were accustomed to moving around in large pens, and they would run right up into the truck.”

Dustin continued, “Several years ago we changed companies and quickly found out our feed conversion and rate of gain were not measuring up.  In order to compete, we felt we needed to convert to a more typical pen layout.

“We called our local Hog Slat rep, Wade Finch, when we got serious about doing the retro.  Wade measured up the rooms and met with us several times before we decided on a final layout.  We set up the rooms with a center alley and 18 pens measuring 18’8” wide X 23’9” long holding 65 head each. 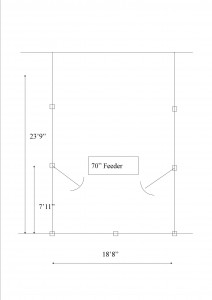 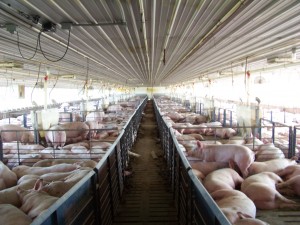 In addition, we created four “sick pens” that are 9’4” wide. 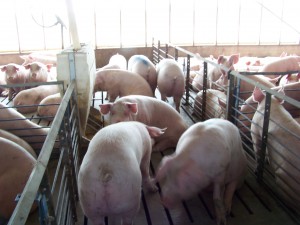 We also added extra gating by the feeders so we can shut off the front of the pen and presort for load out. 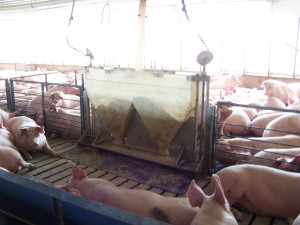 It took a lot of cutting and welding, but we were able to utilize most of the existing gating, feed system and watering equipment for the retro.”

Justin was just starting to sort pigs out of the first remodeled barn the day of my site visit.  When I asked about the results he replied, “We would typically start to sell out of the old system after 18 weeks and finish up with the last ones going out at 22 weeks. We’ll start selling the first group out of the remodeled barn at 13 weeks, and I’m sure the last pigs will be gone at 15 weeks. Chores are much easier; I can see all the pigs and treat sick ones without having to chase them around.”

“Now that I see the results, I wish I would have done it several years ago!”