As livestock and poultry housing became larger and we developed more sophisticated feeding methods, the use of multiple bins in tandem was more common.  While this set-up allowed for greater flexibility in feeding, the front bin of the pair was often prone to plugging.

If we look at the anchor bearing that is present in the rear bin, one would notice that it has a restrictor tube over the shaft.  This restrictor tube fills the core of a flexible auger and prevents feed from filling the core and overloading an auger. This restrictor is not present in the front bin.  When the slide is opened feed overloads the system faster than the auger will move it away.  The obvious solution is to cut the opening down by closing off the slide to restrict feed flow.  This can cause other problems as a feed flows tends to flow only down one side of the bin.  A better solution is to use baffles in the boot to restrict feed flow.  This works to prevent plugging but can cause feed bridging in the bin. 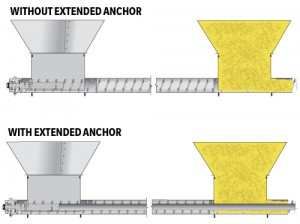 Over the last several years Hog Slat developed and tested a unique solution to this problem.  The final product is called the Extended Anchor Bearing.

Described simply, the Extended Anchor Bearing extends the rear tube restrictor to the front bin.  The auger core is filled in and feed cannot overfill the system.

If an extended anchor bearing would help you prevent auger overload, visit the Hog Slat website to find the model that fits your flexible auger fill system.