I have sold or been involved with swine concrete slats for over 30 years.  For the last 18 of those years I have represented Hog Slat products.  I believe that our slats are the best in the industry and have the most consistent quality. But new slats all look good when they are getting unloaded off the delivery truck. What about when they are 5 years or 10 years or even older?

Last week I was at  Hog Slat’s production plant in Humboldt, Iowa taking pictures of slats.  The plant manager, Dave Shiflett said “You want to see some old slats that we pulled out of a barn recently?”

So we go out behind the plant and he explained that we were called in to replace some slats from local production site.  This particular site was built in 1994. One barn has slats produced by Hog Slat and the other barn has slats from a competitor. 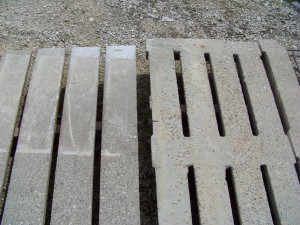 He said “The slat on the left is a Hog Slat slat and the one on the right is from the competitor.  Notice the difference in surface wear on each slat.  The competitor’s slat has rock showing because the top surface has been eaten or worn away.  I grabbed our slat out of the other building that they were not replacing for comparison.”

“Interesting, but they’re not from the same building”

“No but same site which means same water, same feed and same management.  Pretty good comparison of 17 years old slats I would say”

So we started talking about the reasons for the better wear on the Hog Slat product.

Dave said “It’s the denser concrete we use in our mix.  Everybody that has ever poured any concrete knows the less water you use in mixing concrete, the harder, stronger concrete you get.  The standard mix is a 4” slump, which you have to use to be able to place and screed the concrete in the form.  We use a ZERO SLUMP mix in our slats. Let me show you what I mean inside.”

So we go inside and Dave has slump cone in which he places some of our concrete mix and pulls the cone. He adds water to an additional batch to represent a standard 4” concrete mix. 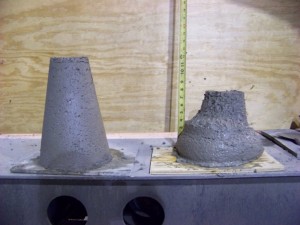 “Note how the concrete mix on the right has sagged down 4” vs. the zero slump concrete on the right? All the rest of the slat manufacturers have to use a wetter mixture because they don’t have equipment that allows them to work a drier mix. Like I said earlier less water means a stronger, denser concrete that wears better and holds up longer in the barns.”

As the industry’s production buildings get older this comparison bears keeping in mind.  Most new slats look the same when they are placed in the barn and you really can’t tell the difference from the outside. Buying slats for a new building or replacements in an existing structure is an important decision that producers should take under careful consideration.  Looking at 17 year old slats is a chance to get some valuable insight that may help with that decision.